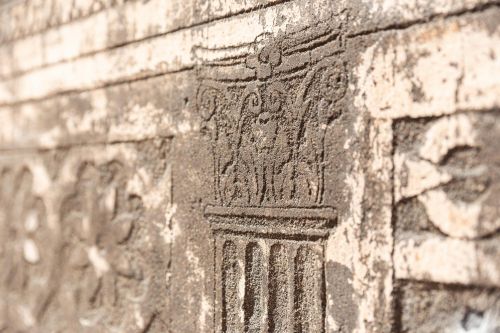 The Castle of Oliveto was built in 1424 by the wealthy Florentine Pucci family and it is one of the most beautiful fortified villas in Tuscany.

The castle, whose name derives from the luxurious olive-groves, which can be found round the hill, is situated on the top of a hill and it is protected by moats, walls and towers which are monuments of military and architectural art.

One can find a lot of interesting architectonic motifs: the flat-topped battlements, four towers at the corners of the building, a small tower with a clock, the courtyard (with its mottled plastering which reminds us of the walls of the old houses of noble Florentine families), the gallery with four arches and the small chapel.

In the gallery there is a well. In the past it received rain-water and was also a refuge and an underground exit from the Castle. Moreover, on top of the walls there is a passage from which you can have a panoramic view of the valley.

When the Castle was under construction, it was stormed by many bands of outlaws that roamed Valdelsa. It was occupied and then given back to the Puccis several times during the war between Siena and Florence (until 1480).

During the bloody war between the supporters of the Medici family (among whom were the Puccis) and the Florentine Republic, some cruel battles took place here. During one of these battles all the grown-ups of the Pucci family were killed, so that the family risked to die out.

Fortunately one of their black woman-servants took a young boy and ran away through the underground passage, thus saving the line of that noble family.

After this heroic deed the servant was portrayed in the coat of arms of the Pucci family.

The Castle reminds us of old battles and of famous and important guests who enjoyed the marvellous landscape of Oliveto and the typical products of these hills such as olive oil and wine.

In fact, in the hall of the castle you can see an epigraph that reminds us of Pope Paolo III Farnese's stay in Oliveto in 1541. Other important people stayed here: Lorenzo il Magnifico, Pope Leone X Medici and Pope Clemente VII Medici.

Around 1850's the Guicciardini family, who were an important and noble Florentine family, became the new owner of the Castle because Count Luigi Guicciardini married Paolina Pucci. In 1828 the Castle was visited by the Grand Duke of Tuscany Ferdinando III and by his daughter, the archduchess Maria Luisa.

In 1928 King Vittorio Emanuele III also stayed at the Castle and in 1944 General Clark requisitioned the hall and transformed it into his headquarters.

Todays the Castle is the centre of a modern and efficient farm that produces wine and olive oil which has, among other things, improved the hospitality of the Castle.

A recent 2015 study, conducted by Prof. Arch. Massimo Ricci of the University of Florence, attributed the design and conduction of the work of the Castello di Oliveto to Filippo Brunelleschi architect known worldwide for the construction of the majestic Dome of Santa Maria del Fiore in Florence.

There are numerous elementes inside the Castle that remind to Brunelleschi, the most important is the use of the brick technology of which Brunelleschi was one of the greatest experts of his time.

In addition to this there are numerous works such as portals, windows, peducci and furnishings in perfect Brunelleschi style.

Despite all these important elements, the detail that really convinced prof. Ricci is represented by the balcony located in the internal courtyard, consisting of a half vault with the same method used in the Dome of Florence.